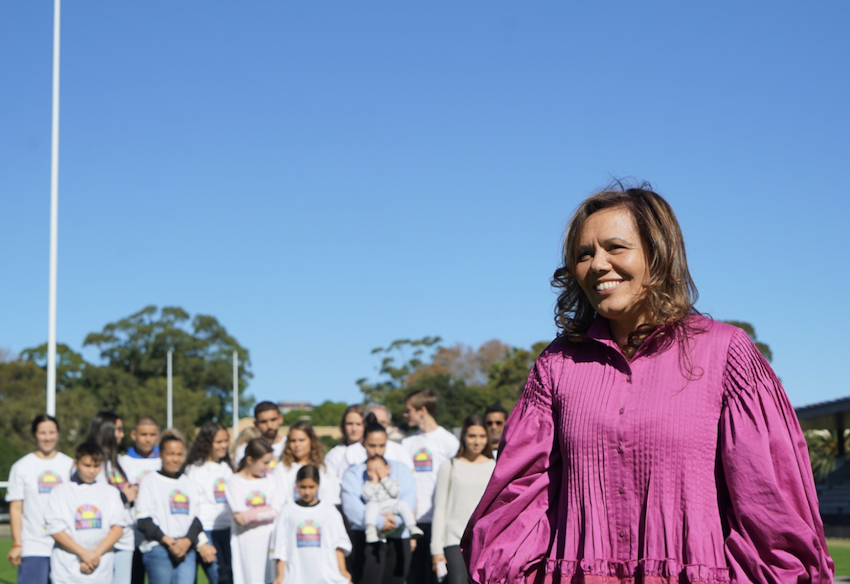 Residents of the City of Sydney, Greater Sydney and Mob around the country may soon witness a historical political moment for our people in the upcoming City of Sydney September elections.  If voted in by the people of Sydney, Wiradjuri woman Yvonne Weldon would be the first Independent Aboriginal Mayor in 179 years since the City of City Council was formed. The candidate’s campaign for race to Mayor comes after 233 years of white settlement and 54 years since the 1967 Australian referendum which brought our people closer to the political sphere.

Ms. Weldon is a proud Wiradjuri woman from Cowra and the Riverina areas of New South Wales, mum-of-three, and a Redfern local with a strong passion for creating positive change for Mob and their communities. Politics are nothing new for the Wiradjuri Woman who has over 30 years’ worth of experience as being a leader for her community in significant government and Aboriginal organisations. She is a grassroots politician and activist from Redfern just like her kin ‘Mum Shirl’ and Uncle Paul Coe both of who were prominent community leaders in their political activism days. Growing up in the inner suburb of Redfern she attended both primary school and high school locally in Redfern and surrounding suburbs, first at Redfern Public School, then Cleveland Street High School, and later on St. Scholastica’s College. Ms. Weldon has spent the majority of her professional career working in Redfern and in the City in a diverse range of roles.

Although the activist-politician grew up in Redfern she maintains her cultural connections to Wiradjuri country and is deeply committed to the protection of First Nations land and waterways as she understands the importance of caring for country from her elders. This is why her campaign’s No.1 Policy goal is  Better Climate Action in order to “minimize resource use, reuse as much as we can and ensure the city is continuing to lead the way in tackling climate change”. Another key policy goal is No. 8 Better First Nations Inclusion, which is her way of fighting for our peoples’ self-determination in politics as she will use her platform as Mayor to “ensure the First Nations Communities are all involved in decision making and the impact of colonisation is acknowledged on our Aboriginal and Torres Strait Islander communities”.

Her professional experience reflects her commitment to creating a more just and fair City of. To date, she is currently the elected chair of the Metropolitan Local Aboriginal Land Council, Deputy Chair of the NSW Australia Day Council, a board member of Domestic Violence NSW, and a Board Member of Redfern Jarjum College. Her passion for change is evident in her extensive leadership roles and her motivation to her cause is highlighted in candidates Unite campaign bio where it where it clearly states she “has a passion for improving the lives of all through health, social justice, Aboriginal advancement, children rights, education, child protection, and research and evaluation”. Ms Weldon and the Unite campaign team hopes to “bring the same audacity, creative energy and fierce optimism to Town Hall that her Aunty ‘Mum Shirl’ brought to her life-long fight to make Sydney a more, just honourable city”.

The Unite campaign is significant for Mob as if she is elected, Ms Weldon would be a powerful force of change for Mob who reside in Sydney. It would mean that for the first time in 179 years First Nations People would have a Mayor that represents us, our struggles and our fight for self-determination and recognition as the First Peoples of this sacred land we walk on together. Ms. Weldon announced her candidacy for Lord Mayor of Sydney from the historic location of Redfern Park where Paul Keating delivered his famous address on Indigenous rights in 1992. In her public announcement of her running for Mayor she stated that her platform “would be based upon unity and bringing people and communities across Sydney together”. If elected in, Ms Weldon would be to the best of her knowledge not only the first Aboriginal mayor of the City of Sydney but also the First Aboriginal Mayor of all of Australia’s capital cities.

If you would like to know more about Ms. Weldon and her campaign as the first-ever Aboriginal Lord Mayor candidate of Sydney then you can sign up online and join campaign Unite. From here you can join the campaigns email list, learn more about her team and if you wish you can nominate to be sent a voting ballot for the September election. You will have the option of early voting both online and in person pending NSW government Covid-19 health restrictions. Congratulations to Ms. Weldon in representing her Mob and the communities of Sydney, we look forward to watching team Unite in the upcoming election.

The election for the City of Sydney will be held on Saturday September 4th 2021.